How do I know if my current Prius battery has failed or is about to fail? 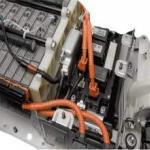 There are several symptoms of hybrid battery failure. Rapid or instantaneous change of the battery status is an easily identifiable symptom. This information can be located on the multi-function display. As the HV battery deteriorates you will notice the battery graphic fluctuating between one bar and eight bars in less than 30 seconds.

Another sign of HV battery failure is an audible fan noise coming from the battery’s cooling fan that is located next to the rear passenger seat. When a battery is about to fail it may overheat causing the fan to run faster than normal as it attempts to keep your battery cool.

When the battery does fail the car will illuminate several warning lights on both the dashboard and the center display screen. A red triangle, VSC, and ABS light (picture) on the dashboard, along with a red car with an exclamation point over it (picture) on the center display are indicative of battery problems. Once these warning lights have appeared Please call us at 949 916-0769

Take note of all diagnostic codes and we will be happy to help you determine if our services are needed.

There are an abundance of used Hybrid on the market right now, it can be challenging to find an older model that does not have HV battery problems. To determine if the battery has already failed, check the dash for the warning lights mentioned above. These lights can be erased from the computers memory by disconnecting the 12v battery for a short time. Under these circumstances, an unknowing buyer can be fooled into purchasing a Car that will need a battery replacement. Driving the car 20 plus miles may reintroduce the warning lights, alerting you to a potential problem. Also pay particular attention to the battery status on the main display. If the meter rapidly fluctuates between one and eight bars, you may have a battery that has failed or is about to fail.

What is an HV battery?

The  HV (High Voltage) battery is a nickel-metal-hydride (NiMH) battery pack consisting of 28 individual modules connected in a series. Each battery module in the pack should measure between 7.2-7.8 volts with about 6.5kwh of usable storage capacity. Each individual module has six 1.2 volt cells rendering the entire pack with 168 cells supplying 220 volts to the Prius electric motor. The electric motor and gas engine work together to provide the fuel economy the Prius is famous for.

The car that changed the automotive game is the Toyota Prius. The technology is simple, yet has a certain sophistication about it that blends well into any crowd.

The car itself really is quite popular. Most people know them for fuel economy, which is great, but what about how they stack up against other cars? I know that I have compared them to other basic commuter cars, but what about the actual costs of maintenance could an owner expect on a clean second generation (2004-2009). Here is what I have found.

What this car is best known for, great fuel economy. While the EPA (environmental protection agency) rates the 2nd generation Prius at 48 city, 45, highway, and 46 combined, I know those numbers are not true. Prius actually can do better than that. Just today driving home from Seattle I was getting close to 50 on the highway.Other Prius owners that I have had the pleasure of chatting with have even documented record numbers in the 60 MPG range at over 300+ miles on that trip. That is super impressive. Coming it at a hefty (no sarcasm there) 11.9 gallons the fuel tank can easily get you well over 400+ miles no sweat.

So what could one expect to spend on fuel for a year on one of these? Well if you only drove an estimated 15,000 miles you should land around $1,100 dollars for fuel (give or take on current fuel costs) That is significantly less money than say a V6 Rav4 which could easily run you about twice that for the same miles driven.

When it comes to fuel costs, Prius is for sure the winner. But this is not all roses and unicorns. During the winter Prius (and any car really) will take a pretty good fuel economy hit, gas mileage drops to 38-39 MPG combined. Not awful but certainly not 50+.

Driving the Prius in snowy and icy conditions, it is very stable on the road. The weight of the hybrid battery offers stability, this can mean that the rear end does not spin out as easily. Another cool thing is that due to the size of the fuel tank, it does not take long to fill it. Although this kind of stinks when you want to wash your windows while you wait.

Even with the good and bad factored in, Prius is still a very good car for just about any condition.

Powertrain, The Prius Engine and Transmission

The Toyota 1NZ-FXE engine is very similar to the Toyota Yaris engine. It has a few modifications that allow it to operate in an Atkinson engine cycle. This means that Prius can, on demand, have a variable compression ratio. We can get more power or more economy just by phasing the camshaft. Pretty neat. The engine also has a low maintenance timing chain. Many Toyota vehicles utilized timing belts for quite some time, but after seeing the benefit of timing chain engines with improved technology, this was a no brainier.The transaxle utilizes two electric motors called MG1 and MG2. MG2 which is also referred to as a traction motor, is the one that moves the car down the road. MG1 is both the starter motor, and it also a generator while the engine is running, this charges the traction (high voltage) battery

Initially, when you are creeping along (15-20 mph) you are running solely on electric power. This is also if the car has gone through the warm up sequence after sitting overnight. Once you hit this threshold the gas engine takes over. I have seen in my Prius with very controlled acceleration from a stop, getting up to 40 mph before the gas engine kicked in.

Stopping at a red light or stop sign, the gas engine (if not shut off already from coasting) will shut down Then when you mash the throttle again you are back in the seat with MG2 and the gas motor propelling you down the road.. During down hill decent or just coasting Prius goes into regenerative braking mode which allows it to capture energy loss and store it in the HV battery. Power flow is shown on the center display.

What The Real World Costs Are For Prius Maintenance

Prius is pretty cheap to maintain. Tires (which for best MPG, should be low rolling resistance tires) An owner could expect anywhere from $350-$475 per set, depending where they are purchased from. Brakes are lasting over 100K miles due to regen braking. Since there is no alternator or belt driven A/C compressor, the only $20 belt you need is the one that drives the engine water pump.

The engine runs on conventional 5W-30 (though synthetic is preferred for the harsh conditions we put the engine though) oil and takes 3.75 quarts.. Oil changes need to be done every 5,000 + miles, depending on your driving conditions. Air filters are not super expensive at around $15 bucks for the OEM engine air filter and $20 for a double pack of aftermarket charcoal activated cabin filters amazon, these are items that anyone can afford.

The hybrid system needs maintenance also. The Prius maintenance schedule shows changing inverter coolant at 100,000 miles and 50,000 miles after that. An Inspection of the transmission fluid every 30,000 miles is suggested but in my experience for $60 worth of fluid and 30 minutes of your time, this is a great investment every 60-100k miles. In my 2007 Prius, I changed hybrid transmission fluid at 250,000 miles, and it was awful. I had bought the car from the second owner who totally neglected it. I am sure it was never changed, ever.

The hybrid battery doesn’t fail very often, but the dreaded P0A80 is a code no owner wants to see. My 2007 Prius still had the original battery when I got it, though it had failed which is why I bought it.