This inverter unit controls the electrical power flows to and from the batteries, the electric motors, the generators and the AC air compressor for Hybrid air condition
The Toyota inverter unit contains 2 inverter circuits and a converter / voltage controller.
The power inverter converts the DC voltage of 201.6 volts to an alternating voltage of 500 volts for the electric motor. The small inverter provides the Hybrid AC compressor power supply for Prius  air conditioning. The DC / DC converter takes care of the 12 Volt for the battery.

The Prius HV battery consists of: 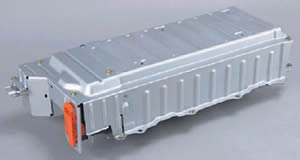 Green is above the norm – The computer system will limit the charging of the HV battery, also limit regenerative power generation and even completely stop at the highest permitted charging level. As far as possible, energy will be extracted from the battery for the drive.

Blue is within the norm – All regenerative energy can be discharged towards the HV battery and the battery can and can provide maximum power for the drive.

Pink is below the standard – The withdrawal of power from the HV battery for the drive is limited and completely stopped at the lowest permissible level.Also, the combustion engine will no longer switch off, but ensure a charging current through the generator to the HV battery.

The Toyota Prius has a 12V – 35 Amp / hr lead / cadmium Battery, this battery provides the power supply of the control, control and control systems.This battery is in the luggage compartment and is not just auxiliary battery but essential for the proper functioning of the Prius.
The auxiliary battery is charged from the HV battery via the converter. Loading starts when the hybrid system is started via the Powerbutton. The combustion engine does not need to be in operation for this purpose. 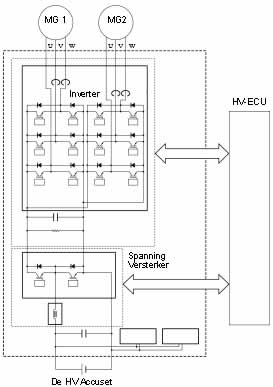 Power Inverter The power inverter of the Prius is an electrical converter that converts the DC power of the HV battery and the AC voltage of MG1 and MG2. The inverter consists of two 3-phase bridge circuits, one for MG1 and one for MG2, each circuit consists of 6 power pulses and converts the DC power of the HV battery into a three phase AC voltage and the alternating AC voltage of MG1 and MG2 in a Direct voltage. The activation of the power transistors is controlled by the HV-ECU. This sends a control signal to the power transistors. In the inverter there are a number of sensors / sensors that send information about the supplied power, voltage level, temperature to the HV-ECU. The inverter in the Prius II is also equipped with a voltage amplifier circuit which increases the input voltage (201.6 volts) of the HV battery to an output voltage of up to 500 volts for MG2. The inverter controls the voltage level based on the power requested by the HV-ECU between 201.6 volts and 500 volts, thus keeping the current to MG2 equal. The inverter produces quite a lot of heat during these control operations, so that it must be cooled by a separate and internal cooling circuit together with MG1 and MG2.

There is also a separate second and smaller inverter circuit, this circuit converts the 201.6 volt DC power from the HV battery to a 201.6 volt AC voltage for the air conditioning compressor.

ius II converter is placed in the lower part of the compact housing. The converter is responsible for converting the 201.6 volts DC from the HV battery to 12 volts DC for the charging of the auxiliary battery

Battery and Ecu charge levels and condition of the HV battery are monitored. Battery-Ecu receives various status signals from the HV battery, such as the battery temperature, outdoor temperature, voltage level of each module, and power to and from the HV battery.
The Battery-ECU checks the process of charging and charging the HV battery and the required cooling. The Battery-ECU communicates continuously with the HV-ECU. The Battery-ECU sends charging / discharge signals to the HV-ECU. The HV-ECU keeps the charging state at the desired level by calculating the load and discharge amp and, if necessary, adjusting the hybrid drive status. The HV-ECU control is configured to keep the charging level of the HV battery as much as possible between 40% and 80% to ensure a long battery life. If the battery pack temperature becomes too high, loading / unloading is limited or interrupted and an alarm is generated.

At Prius repair shop we specialize in Hybrid repair Such as Toyota Hybrid Lexus Hybrid Repair , Honda Hybrid Repair specially Toyota Prius since 2001, we have invested in EV tool and computerized equipment for Toyota Prius  Hybrid repair and hybrid vehicle service and repair. Toyota has almost entirely designed the hybrid drive of the new Prius third generation engine and Prius transmission. the ride of Toyota Prius becomes more powerful. the part shown here is the electrical part of the hybrid drive. the left one is configuration of the second-generation of Toyota Prius. and the right is belong to second generation of Toyota Prius. as you can see The AC synchronous electric motor/generator and modified configuration of Prius transmission. 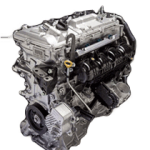 Toyota promises that the Prius offers the same comfort and very smooth rides, in the city drive Toyota Prius surpasses that promise thank to the perfectly silent electric motor. But on the highway, the Prius offers great comfort, the car glides like a true limousine on the highway. The new EGR system allows for the recovery of heat from the exhaust gas stream. this allows for a shorter pre-heating time of cooling system of the internal combustion engine, so it has been previously heated up. therefore, the engine may stop earlier. in additional, there is faster heat available for heating the interior. the EGR system. increases the efficiency of the overall hybrid drive relative to the drive in Prius 2

if the charge level of the auxiliary battery is too low, eg by self-discharge, the Prius 12v battery will be discharge in a month, a battery should never be fully discharge. 11.5 volts is a safe limit, stronger discharge leads to defects at 10.7 volts. the battery is clinically dead. the problem with lead acid batteries applies to all cars and of course not only Prius.

-The Prius fob does not open only the diver side

-all the electrical system are dead. the Prius is not starting

-the auxiliary battery is not accessible, because the rear door is not open

the Prius can be jump by using the jump start terminal and a second battery, the terminal is located under the hood in the box on the right side.